Flirting with State Failure. Power and Politics in Kyrgyzstan since Independence 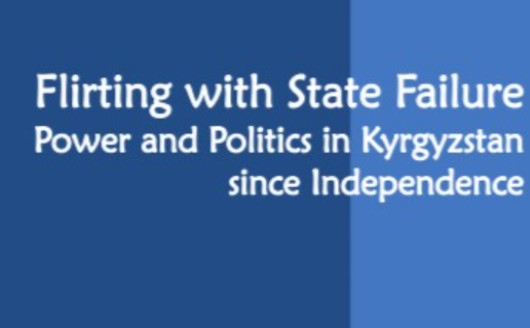 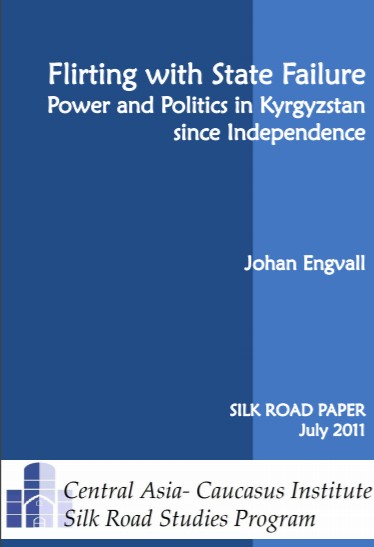 2010 was a dramatic year in Kyrgyzstan. In April, a revolt unseated the country‟s leader for the second time in five years. In the aftermath of this upheaval, deadly ethnic riots in June took the life of over 400 people in southern Kyrgyzstan and led to the displacement of more than 100,000. After these events, parliamentary elections were held in October bringing hope for stability and peaceful developments.

Those elections inspired observers to talk about a historical watershed of democratic politics and a parliamentary system in Central Asia. Yet in order to understand the challenges and opportunities ahead and assess whether a fresh start for Kyrgyzstan is likely, it is not sufficient to look at elections, or indeed the formal structure of government. It is necessary to go beyond these to seek an understanding of how Kyrgyzstan‟s politics actually have come to work since independence.

This study aspires to do exactly that. Beginning with Kyrgyzstan‟s political situation at the dawn of the unexpected independence from the Soviet Union in 1991, it examines the progressive first years of independence, when the country‟s first President, Askar Akaev, was widely lauded by the international community for his bold attempts to introduce democracy and a market economy. Although Akaev appears to have harbored a sincere vision of reforming the political and economic system, he ruled through a heterogeneous government unable to implement these ideas in real life, leading to chaos and minimal levels of governance. In this environment, people were largely left to seek protection and justice on their own.

Starting in the second half of the 1990s, Akaev embarked on an increasingly authoritarian path. Using referenda, the president strengthened his formal political powers at the expense of other branches of the government. Moreover, the president and his family increasingly approached the state and the economy as personal fiefdoms. A ruling family emerged, based on control over the country‟s politics and economy, which increased popular dissatisfaction with the incumbent leader. This culminated in the so-called Tulip Revolution that unseated Akaev.

The Tulip Revolution initially brought hope for renewed democratization. Yet under President Kurmanbek Bakiev‟s tenure, from 2005 to 2010, Kyrgyzstan‟s downward slide accelerated perilously. The new ruling family created a full-scale kleptocracy based on establishing control over all major financial flows, and top government positions were distributed to the president‟s closest family members at the expense of competing political elites. In pursuing this aggressive policy, Bakiev overreached; his overthrow in April 2010 demonstrated that violence had become an increasingly accepted method for regulating politics.

This study concludes that political power in Kyrgyzstan is a battle between personalities, not organized group interests. Elites compete for power not through formal institutional channels, but by means of competing informal patron-client pyramid networks. These networks are primarily based on two things: family ties and money. When one of these pyramid networks manages to consolidate power, the state itself is constructed according to the same basic logic, and is made to function as a shield protecting the ruling group from the rest of society. A striking feature is the extent to which political power is motivated by greed: ideology as well as other motives for seeking power are very weak. Consequently, many key political figures rather take the money and run, instead of resisting attempts to usurp power with decisive force. Against this background, the power changes in Kyrgyzstan in 2005 and 2010 are not as dramatic and “revolutionary” as often proclaimed; they are rather manifestations of the nature of power in the country.

The actual political order that has emerged in contemporary Kyrgyzstan has three major features. A first striking component is the dominance of personalized influence games. In this system, success is dependent on proximity to the president and his family circle. As a consequence, property rights are rarely protected by courts but are beholden to the courtesy of the ruler‟s will and the shifting balance among competing families. Economic holdings can be protected if claimants in some way or the other can demonstrate their commitment and willingness to serve the ruling family, and manage to find a mutually beneficial relationship with its representatives. In brief, rather than relying on due legal process, finding a so-called political roof (a krysha) is ultimately the only way to protect rights, and a fundamental element of order. In contrast to a predictable judicial order under the rule of law, however, the personalized influence system ensures very short term jurisdiction. If an individual becomes a political threat, protection can be withdrawn instantly.

A second pillar of political power is the redistribution of rents. In Kyrgyzstan, out of necessity, all large economic entities are also political organizations. No business can survive without connections to the state. In a system based on controlling rents, the strongest politician needs to be the biggest business executive. Thus, the separation between politics and the economy that is generally assumed to exist across countries is merely artificial in Kyrgyzstan: the state is in fact the arena through which wealth and status are obtained. From an economic perspective, what has emerged in Kyrgyzstan is not a market-oriented capitalism but a politically-oriented capitalism.

Finally, the state itself is organized as a marketplace. For the operation of the state, this market logic holds a number of significant implications. First, administrative and political offices are investments much like on any other market and are motivated by return on investments by the means of graft. Second, due to frequent government turnovers, individuals adopt a very short term decision horizon and seek return on their investment as quickly as possible. Third, since the ability to pay for a position determines who will be appointed, the quality of governance is negatively affected. Fourth, since they are effectively privatized, there are in reality no state-supplied public goods; access to police protection or redress in court require informal monetary payments. Fifth, funds that could flow into productive economic activity are instead circulating unofficially among state officials with negative consequences for economic growth as well as for the state treasury.

Against this background, is a fresh start likely in Kyrgyzstan, and could a parliamentary system serve as a vehicle of change?

First of all, political change in Kyrgyzstan cannot be measured by changes in the formal framework of governance. A new development path requires fundamental changes to the motivation and behavior of the political elite. Yet the performance of the provisional government and of party leaders in the new legislature raises doubts about whether the new political leadership fits this ticket. In fact, as before, corrupt practices and the redistribution of assets for private purposes have continued to dominate politics. In an optimistic scenario, a parliamentary system may gradually reduce the possibility of one particular faction to monopolize the forms of corruption around which the system is being organized. Increasing competition in the political economy may gradually stimulate more diverse alliances and more interest groups, leading to more universalistic rules at the expense of the particularistic personal relationships presently defining the country. However, there is also the question of whether the state is too weak to actually manage to provide the basis for a functioning system of governance, whether parliamentary or presidential.

What, then, should the priorities be? The political leadership must get the logic right. Democracy is a form of governance of a state. Therefore, for democracy to make a substantial difference, it is of paramount importance that the state be rebuilt. Critical dimensions include ensuring basic law and order, a functioning public administration that provides citizens a minimum of public goods, increases the government‟s public legitimacy, and reduces the role of alternative sources of authority and protection. Developing a sound judicial system is also important in order to curb the dominance of informal personal relationships in shaping political power and access to wealth.