In Defense of Greater Central Asia 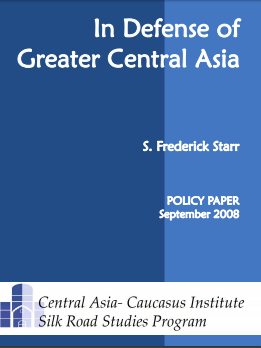 * This Essay was first published in Politique Étrangère, no. 3, 2008, published by the French Institute of International Relations (IFRI)

In recent years the term “Greater Central Asia” has become the subject of extravagant hypothesizing. Is it the work of some international band of globe spinners, a conspiracy to be launched by Washington, or simply a new way of conceptualizing a region that has been there throughout history? Lacking clarity on its meaning, the phrase “Greater Central Asia” becomes a kind of Rorschach Test, revealing more about the fears of the observer than about the actual region.

Because I have employed the phrase in print, my name has been linked with the concept of a “Greater Central Asia.” In the essay in question I employed the term as a convenient way of denoting the larger cultural zone of which the five former Soviet republics – Kazakhstan, the Kyrgyz Republic, Tajikistan, Uzbekistan, and Turkmenistan – are a part, along with Afghanistan. It did not occur to me that this required an extensive explanation. But it clearly demands one, which this essay now attempts to provide.

CACI FORUM: Resolved: that Centripetal Forces in Central Asia and the Caucasus Today are Stronger than Centrifugal Forces, or soon will be

"Resolved: that Centripetal Forces in Central Asia and the Caucasus Today are Stronger than Centrifugal Forces, or soon will be"

Since 1992 the price of sovereignty in Greater Central Asia and the Caucasus has been a decline in regional contacts and cooperation.  Is this changing today?  Rising leaders from the region will evaluate this crucial question and offer their prognoses for the future.

CACI Forum: U.S. Policy on Religious Freedom in Central Asia and the Caucasus: does it work?

"U.S. Policy on Religious Freedom in Central Asia and the Caucasus: does it work?"